Now Apple has come out with the HomePod mini which comes in at $99 and is quite different from the original HomePod. With Apple’s continued work on Siri, this one has more smart capabilities than when the original HomePod hit the market. This HomePod is obviously smaller from the original, but it is also simpler and a lot less expensive. But how does this new smart speaker stack up with the competition?  Let’s take a look.

First off, the HomePod mini is a totally different shape from the larger HomePod. It is a ball shape with a flat top instead of the soft cylindrical shape of its predecessor. It is covered in the same soft mesh fabric and comes in light or dark gray.

There is a plastic touch pad on top that you can use to load Siri, play music, and adjust volume. This pad also has lights underneath it that light up in different colors when communicating with Siri, go to white when playing music, and green when the mini is being used to answer phone calls. It’s been noted that this interface seems less accessible when compared to the buttons on Amazon and the touch areas on Google.

There are four microphones on this speaker that are used to pick up voice commands and according to Apple the S5 chip in the mini can analyze the music being played and adjust the output to give the best quality. The mini does do a good job hearing voice commands while music is playing and Siri is quick to respond. It appears that Siri has a faster response time than Alexa and Google Assistant which is a plus for Apple. 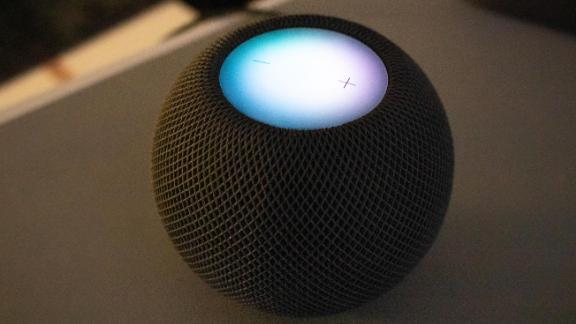 Apple designed the first HomePod to have a high sound quality instead of focusing on its smart functions. To me sound quality is important, but for serious music listening I’m going to use the stereo system in my basement with the tower speakers and subwoofer not a smart speaker. Anyway, that is probably why the HomePod didn’t make the splash Apple hoped it would.

As far as the mini, the sound quality is still good if not quite as good as the original, and is better than its competitors that are the same size. You’ll get more bass with this speaker than you will with the Echo Dot for instance. Overall the HomePod mini performs better than the other small smart speakers but doesn’t really compete with larger speakers like Echo, Nest Audio, and the Sonos One. This is interesting because the mini is priced similar to these larger speakers but produces a sound more like the smaller versions.

The mini is 3.3 inches tall and has one speaker that is a downward-firing full-range driver designed to spread the sound along with two passive radiators for lower bass tones. This doesn’t really compare to the multiple active speakers you get with the Echo and Nest Audio.

Overall the sound is good but it just can’t keep up with the larger speakers that have the same price. Also, unlike the Echo and Nest, you can’t pair the mini with an external subwoofer or stereo system.

As far as the 360-sound, the mini does a good job. The sound doesn’t change as you walk around the room which is good if you plan to put it in the middle of the room. The mini is best for casual listening or background music but won’t compete with a more typical sound system.

This is pretty obvious but the HomePod mini works with Apple products. There really isn’t any point in buying one unless you’re an “Apple Person”, and that goes for the other people in your home as well.

Cross-platform audio streaming is not supported which rules out Google Cast and Spotify Connect. This isn’t a problem if you are fully part of Apple’s world but most people and families aren’t. The HomePod competitors in the smart speaker market do allow more choice with support for both iOS and Android and different services.

Both the HomePod and HomePod mini have Apple’s new Intercom feature which is similar to Google’s Broadcast and Amazon’s Drop In. The Intercom feature allows someone to send a voice message to other Apple devices in your home and then someone can send a voice reply. This means you can send voice messages to everyone in your family that has an iPhone, iPad, Apple Watch, or AirPods.

As stated earlier, the HomePod mini can be used as a Home hub. This will allow you to set up a Siri-controlled smart home using this mini speaker. Unfortunately though, HomeKit has fewer smart home products than Google and Amazon. There aren’t as many cameras, thermostats, or smart locks.

Also Siri isn’t necessarily the best voice assistant either so keep that in mind when building a smart home. You can still have a smart home with Apple equipment but it’s not going to compare with the possibilities offered by Google and Amazon. Still, there are many Apple fans out there who are just fine with Siri so a Siri-controlled smart home will be good enough for them. Plus you need to consider the Apple people who fear jumping ship will be just too painful of a process.

So the conclusion to this is if you ARE and Apple fan, we think you’ll be happy with the under $100 HomePod mini smart speaker. It offers a really good sound for its size, improved smart speaker capabilities, and for those who already have a number of Apple products, the mini will be a welcome addition.

For Android users it probably goes without saying, but the mini and Siri smart home will not be your best choice. There are many more affordable options that have more capabilities.

It’s also a tough choice for iPhone owners that don’t yet have smart home devices because the iPhone also works well with Google and Alexa smart home apps.

In the end Apple people will be happy to know there is now an affordable Apple option for a smart home solution.

Please leave a comment below and thanks for reading.