I remember when I was kid watching a show called Lifestyles of the Rich and Famous with a host named Robin Leach. It was funny because he had an English accent and would yell everything he said.

Every week he would showcase different rich and/or famous people and present their extravagant lifestyles to all us commoners. It was a huge celebration of materialism, people with huge mansions, yachts, and expensive cars. Well that’s what we are going to do today only with home audio. Why you might ask? Just because, and because I’m curious.

We are going to take a look at the most expensive stereo speakers in the world and let’s just say there’s nothing on this site currently that even comes close to approaching the price tag of some of these. The other reason we’re going to look at these are that most of them look really cool. Even though I’m pretty sure I will never own anything on this list, I like looking at them or at least pictures of them. Similar to how I feel about motorcycles. I don’t really have any desire to own one but I do really like looking at them. 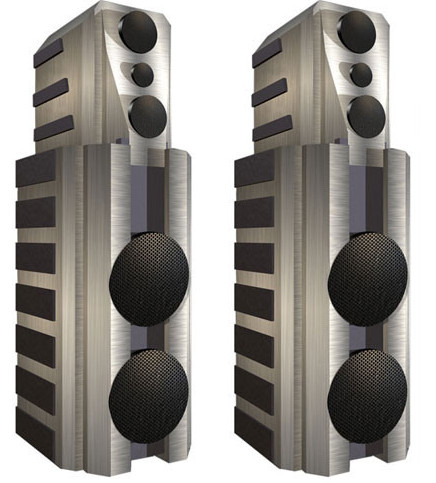 With its futuristic style and design, the HigherFi Audio Titan 2 is no joke. Made by HigherFi Audio, these speakers weigh an incredible 1800 pounds and produce 92 decibels of sound. They come in ranges from 20Hz up to an ultrasonic 90kHz making them very versatile. They are durable speakers that will last a long time and I would think at $520,000 they better.

Of course these speakers are hand-made and the cabinet is made of mostly aircraft grade aluminum and white steel. Within each cabinet you’ll find two sub woofers, two midrange drivers, and one tweeter that will get you to 90kHz. 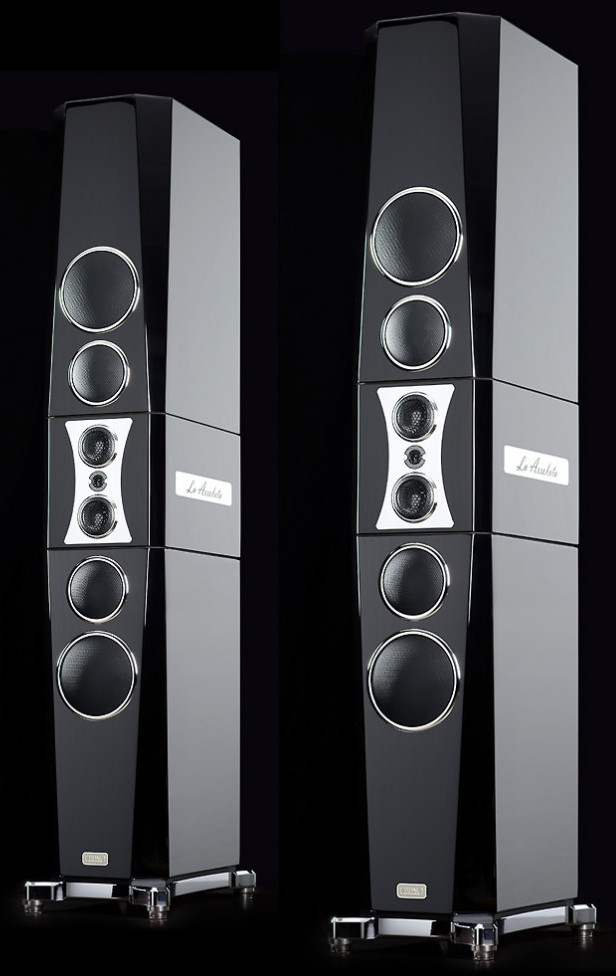 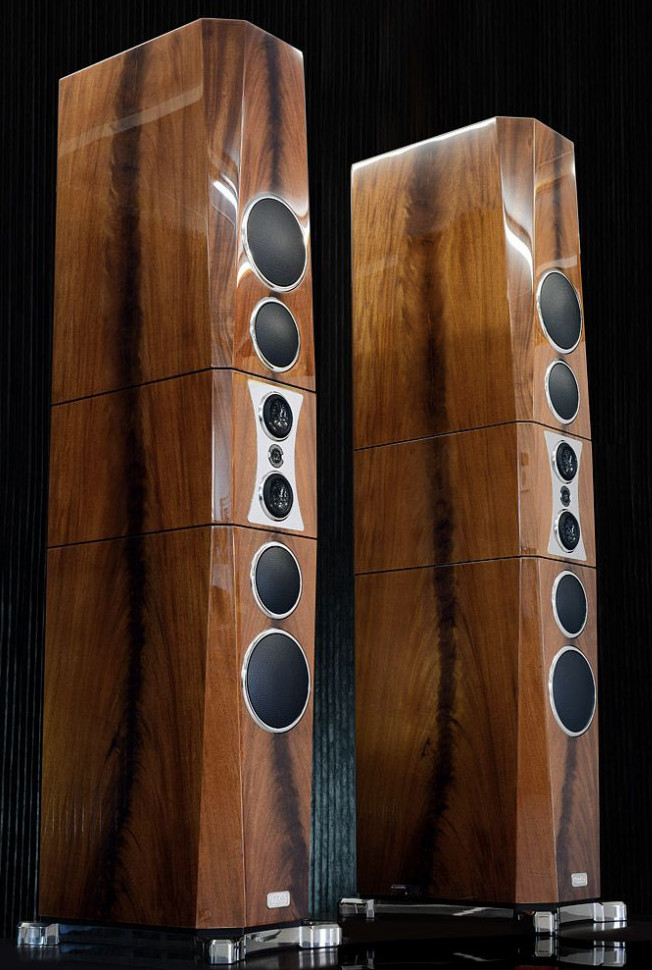 Just a touch more than our previous entry at $550,000, the Tidal La Assoluta often referred to as the perfect speaker. With this set of speakers, you’ll enjoy impeccable sound utilizing the first ever 30mm diamond tweeter (we’re talking pure diamond, like 54 carat), four symmetrical bass drivers in push-push configuration that are phase aligned perfectly around the high-midrange heart, and pure silver capacitors. The sound these speakers produce have been described as a mind-bending experience. 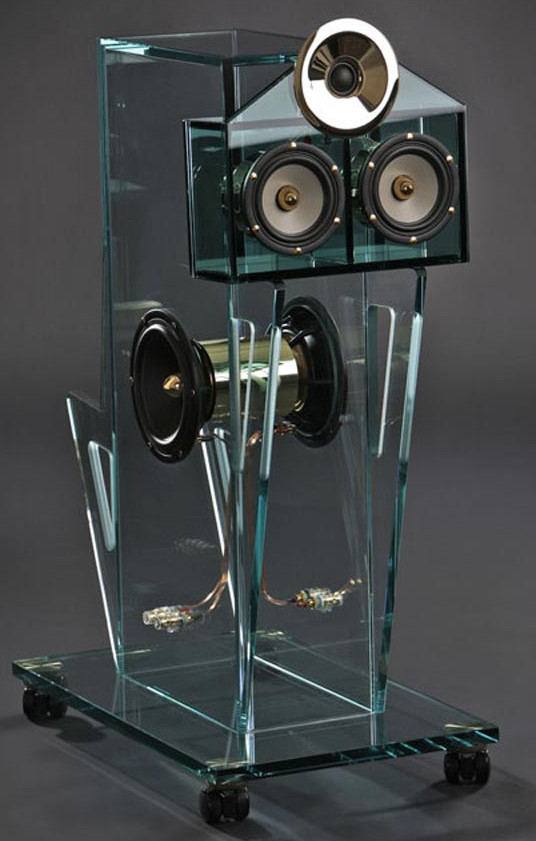 Well doesn’t this look interesting? The Perfect 8 Force is a state-of-the-art system that stands at six feet seven inches and weighs about 440 pounds. This contraption produces a big impressive sound (I hope so) and is made of two gold towers and two glass towers that hold four sub woofers with 12-inch custom dual modified drivers. Actually the speaker has been described as being able to create sounds and emotions extremely close to a live performance. The Perfect 8 speakers are a major innovative jump in sonic research that leave the current state-of-the-art behind, realizing principles that were only known in theories. 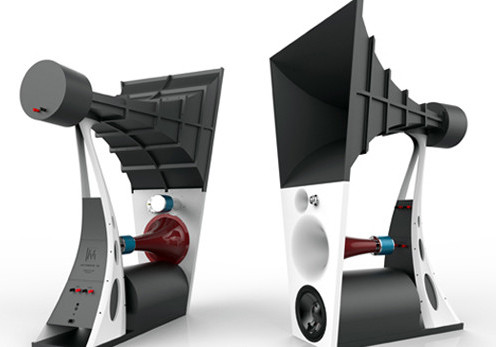 For a measly $700,000 you can own the Magico Ultimate III Loudspeakers. As you can see from the picture, these speakers are horn-driven and stand tall looking as good as they sound. To be precise they are a towering eight feet tall and weigh 1,000 pounds. These speakers are a five-way horn-loaded all-aluminum system and require 10 amplifiers. In addition to the horns there are six ALE compression drivers and four custom-made mid/bass and bass drivers that are split by an active DSP-controlled crossover. When you order these you’ll have to wait 18 months to get them, so keep that in mind ; ^ ) 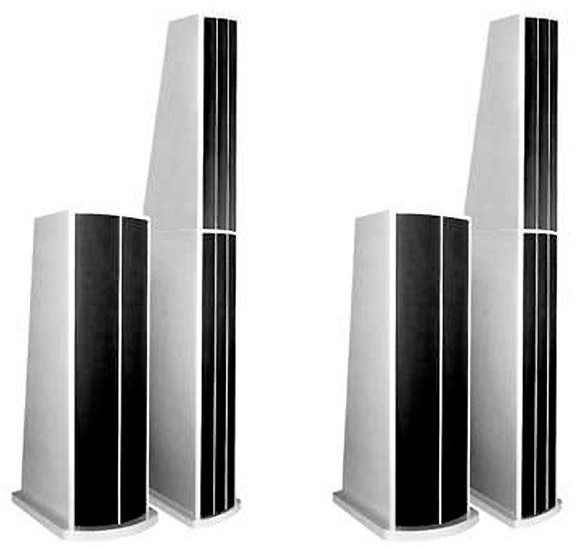 Also coming in at $700,00 are the Infinite Wisdom Grand speakers made by Wisdom Audio. These speakers are a triple stacked three section system that is over 13 feet tall and should work well in any “palace, ballroom, or mansion”. They weigh about two tons and produce levels of sound up to a whopping 120 decibels (I think loud sports stadiums have a hard time reaching that level). Thanks to their many transducers, distortion is low keeping the music they produce sounding as it should.

With WAMM standing for Wilson Audio Modular Monitor, the Master Chronosonic is a multi-module loudspeaker. The time alignment for each module can be adjusted in five-microsecond increments. According to Wilson Audio, if you align the drivers correctly to the listening position you’ll get a realistic lifelike sound.

Each speaker is almost seven feet tall and made with aerospace-grade aluminum, and is built with an open architecture to minimize stored energy. Taking ten weeks to build, Wilson Audio is only making 70 pairs each going for $850,000. OK so now we’ve reached a cool million dollar system. Standing at just over nine feet tall and weighing four and a half tons, we have the Cessaro Horn Acoustics Omega 1 horn speaker system. Supposedly these speakers are meant for normal living rooms so maybe I’ll take a look since I have an extra mil just lying around doing nothing.

The front-loaded horns have six 40cm bass units and come in the color of your choice. The same goes for the cabinets with their extensive range of veneers. 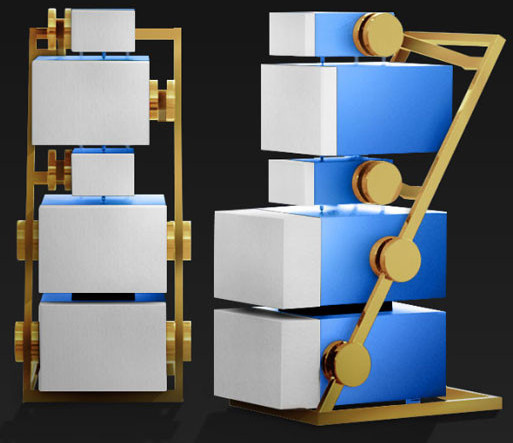 Also, at a million dollars, are the Goldmund Epilogue Signature Audio System. Goldmund has been producing very high-end speakers for over thirty years. This system is a modular speaker system that has many configurations and can be added to over time in case you don’t have the full million just yet.

The speaker enclosures are built entirely with brass and aluminum, and have internal steel bracing used to capture vibrations and expel them to the Mechanical Grounding evacuation bar. The performance of these speakers can reach the sound pressure levels that exist in the very best theaters when sitting close to the screen. 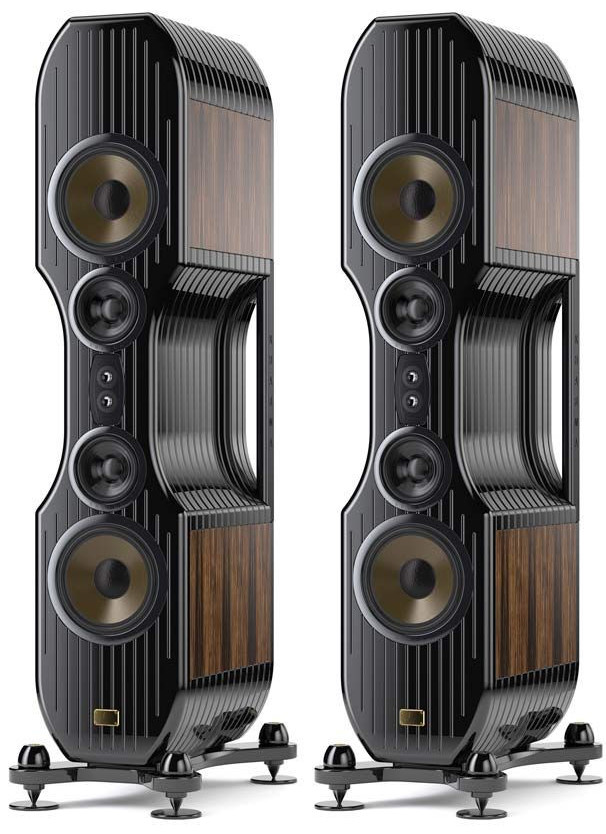 These million dollar speakers come from a high-end Dutch manufacturer. Said to have been designed in a huge cellar to focus on perfecting its performance and body, only 25 pairs will ever be made. The quality is guaranteed by its two Diamond tweeters as a standard. The cone of the Diamond tweeters create extremely pure high frequencies.

These speakers are part of the company’s flagship series called the Exquisite Collection and sit at the end of the high-end in audio. So hurry while supplies last. 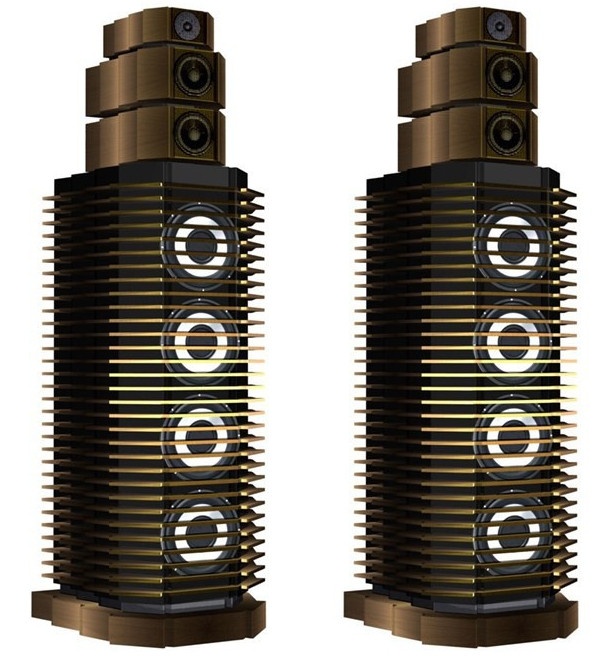 Here is another entry from HigherFi Audio appropriately named Opulence. Passing the million dollar price tag at 1.1 million, only 10 pairs of these speakers were produced. According to its producers at Moon Audio, they offer “an optional second way of experiencing music, which is independent of the drivers in the speaker itself and delivers music into the listener’s brain, bypassing the ears”. Huh? Well anyway I guess that’s a good thing. 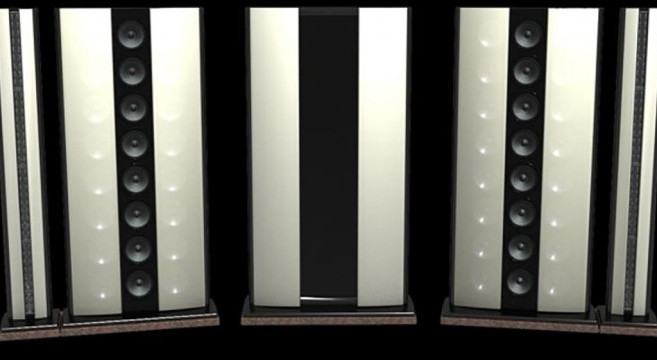 Climbing even higher to 2 million, we have the Ultimate created by Transmission Audio. This speaker system uses 40 sub woofer cones lined up in a grid formation that can produce frequencies so low and distortion so limited it can’t be measured. It also uses small but powerful neodymium magnets inside its six and half foot tall body. Inside is a thin metal ribbon that is responsible for the great sound the Ultimate creates.

To quote the manufacturer, if you compared these to a sports car you would have to “combine the specifications of Ferrari, Maserati and Koenigsegg in one chassis”. 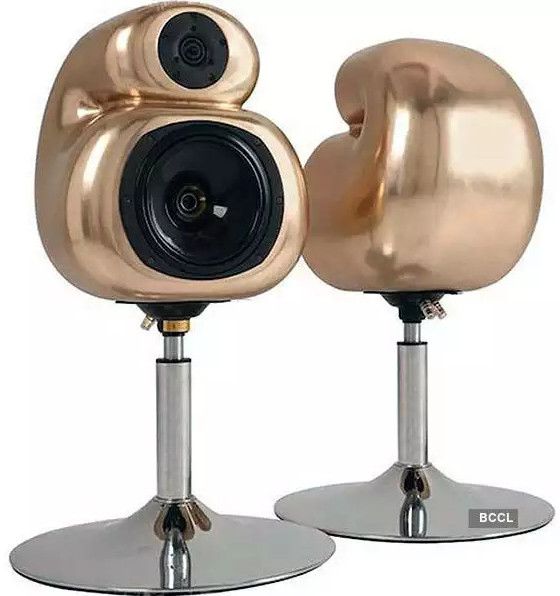 Well I guess if you haven’t found what you are looking for yet, maybe these five million dollar speakers will do the trick. Why are they so expensive? It probably has something to do with their 28-inch cabinets cast in 24-carat gold.

As you can see these have an unusual shape that Hart describes as drawing a parallel between these speakers and the human ear. Quoting the company, “To amplify sound at the cochlea, three bones vibrate a window in the inner ear. This amp-lification is re-created by the cabinet being entirely silent. It is so solid and inert that almost all the energy from the drive unit enters the room instead of being used to vibrate, resonate, or excite a wooden cabinet. The result is super-efficient, clean sound without any cabinet noise.”

Made at Hart’s factory on the Isle of Wight, these speakers take 200 hours to cast and hand-finish each pair. If five million is out of your price range, you can get these in bronze for a paltry $64,000, or silver for $300,000. 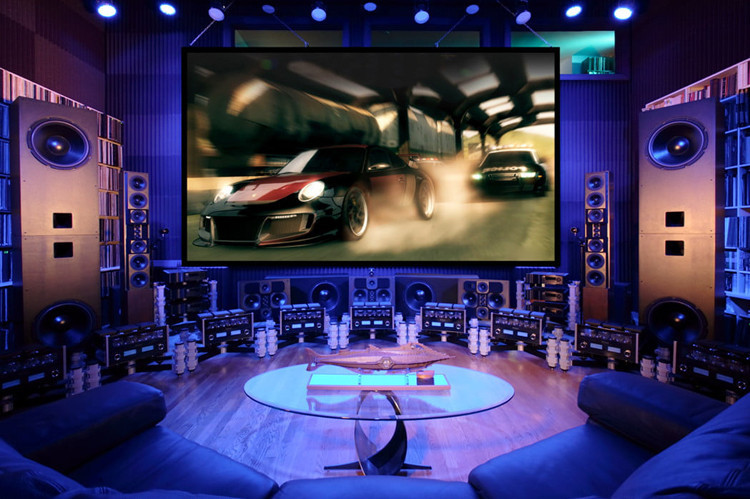 OK so our last entry isn’t a set of speakers but an entire home theater system. It’s here simply because I thought it was cool. Feast your eyes on this six million dollar home theater system created by Jeremy Kipnis. Jeremy customized his KSS 8.8 channel audio system adding Snell subs to create a chilling effect of realism. At six million dollars, it may be the world’s most expensive home audio system.

OK, we’ve made it to the end. I hope you enjoyed this museum of sorts containing the most expensive stereo speakers in the world. Most of us probably won’t be getting any of these systems anytime soon but I think it’s cool to see what is out there. And of course you can still get great sounding speakers at reasonable prices. Let me know your thoughts in the comments below or other speaker system you think I should check out. I will catch you next time.

Shop all Weekly Deals for up to 50% off + Free Shipping on select TVs, Headphones, Home Theater, Bluetooth Speakers, and MORE at World Wide Stereo.