Turntables have made a comeback in recent years as vinyl has become popular again. There are many of us that are listening to vinyl for the first time. I’m not one of those though, in my younger days vinyl was the main way we listened to music.

Some of us had 8 track tapes and then cassettes came out and those were popular mainly because you could record to them. I suppose that was the dawn of the mix tape even though we didn’t call them that back then.

The turntables that we used today and in my youth originated around 70 – 100 years ago. Probably the most popular was the old Victrola and its well-known ad featuring the dog. 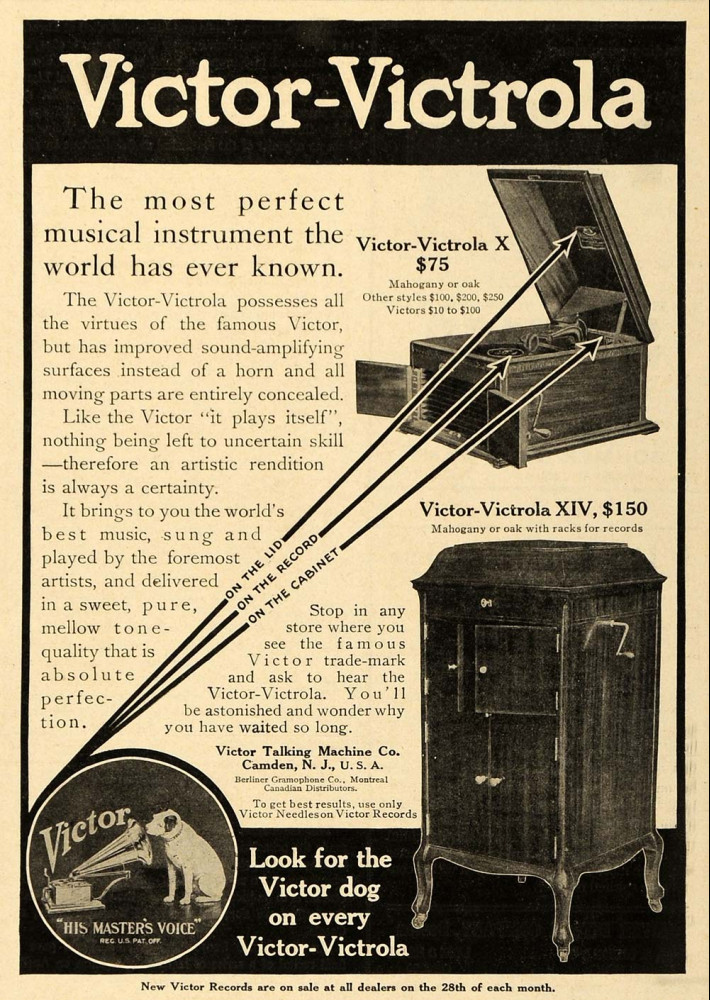 Of course today’s modern turntables look quite different from the ones 70 years ago, but there is a new market for retro looking turntables and the new Victrolas are probably the best.

If you are a serious audiophile and want to add a turntable to your system, a portable retro turntable will probably not suit your needs. Check out the best turntables for the money for more information on that.

The Victrola turntables shown below are mainly geared toward the vinyl hobbyist or those that want a standalone turntable that can play records and look cool at the same time. If you are not familiar with Victrola then you should know that Victrola has been making record players for over a hundred years.

So let’s take a look at some of the current Victrolas on the marked today and see if one of these will look good in your home. 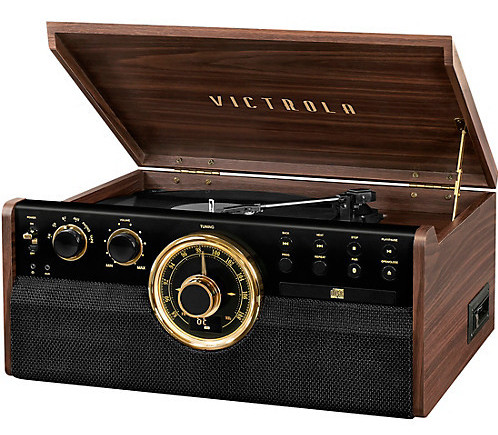 Our first entry is the Victrola 6-in-1 Wood Mid Century Record Player. As the title says, this is a mid-century design.

This is a really cool looking record player and comes in espresso, walnut, and gray. This is also the most expensive Victrola here and looks like it with the analog radio dial that has LED lighting around the dial and gold accents.

The turntable plays in the 3 typical speeds for vinyl records and also plays cassettes, CDs, and FM radio. In addition, you can stream music via Bluetooth.

There are two built-in speakers that have a decent sound but the volume does not match external speakers as should be expected. It’s dimensions are 18.9″ x 15″ x 8.7″.

If you are looking for that cool mid-century style, then this Victrola is for you. 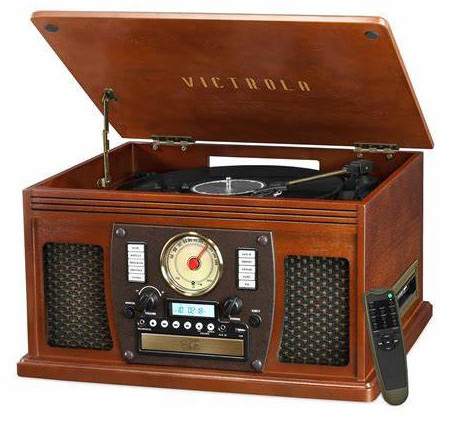 The Victrola Nostalgic Navigator 8-in-1 is not only the best Victrola but may be the best turntable in this category. It’s called 8-in-1 because it does a lot more than play records. It also supports CD, cassette, music from USB, smartphone via Bluetooth or wired connection, and the radio.

One issue that many record players in this category have is the built-in speakers aren’t very good. The speakers in this unit are better than what is expected for something in this prices range but still can’t compete with external speakers. You can connect to external speakers using the headphone jack if you need more volume.

As you can tell from the picture it looks pretty cool with its vintage design and comes in black, white, espresso, mahogany, and oak. The cabinet is made of real wood.

The turntable has three speeds 78, 45, and 33 RPM for the types of vinyl records that I’m aware of. You can also stream music from your smartphone up to 33 feet away. Another nice thing about it is it has a 1 GB drive allowing you to record from cassettes, CDs, and even vinyl via USB.

This Victrola is a little heavy at 22 pounds so it’s not necessarily portable but I would guess you wouldn’t really want to move it since it would be a part of your decor. Its dimensions are 18.2″ x 13.2″ x 10″.

Overall, the Victrola Nostalgic Navigator is very versatile, looks great, and has a great build quality. This record player has a lot of features and also has a great price. 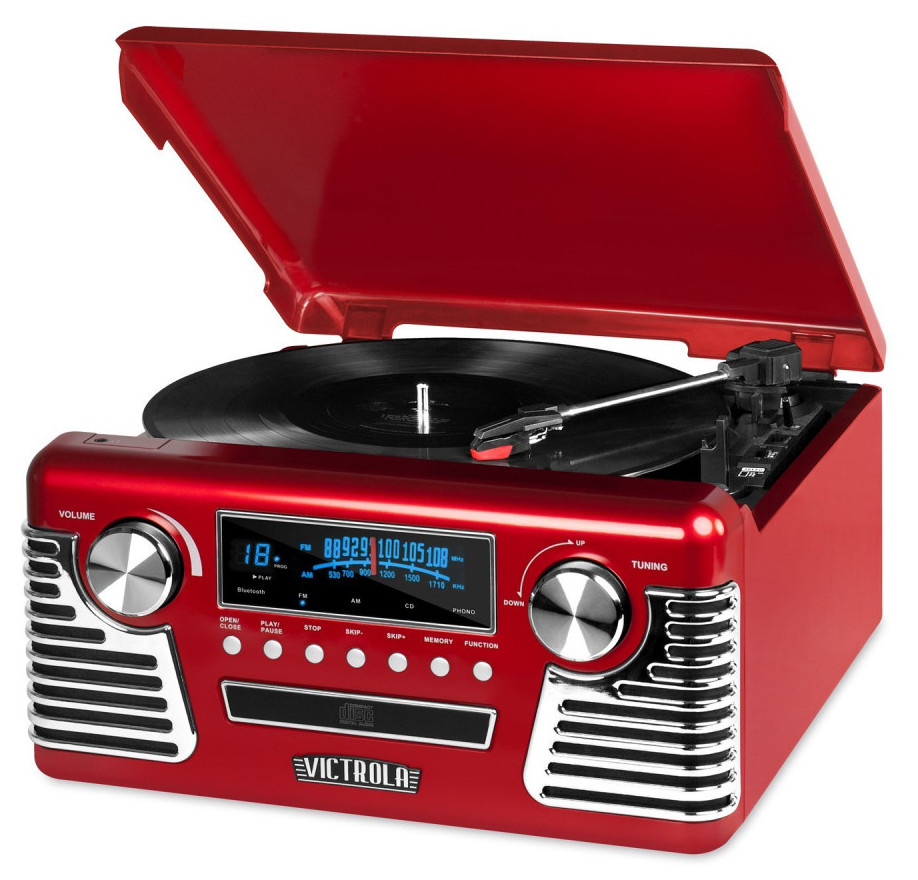 For this next Victrola we travel to the future into the 1950s. Like the Navigator, this turntable comes with a lot of features.

It has 3 speeds, plays CDs, and music from devices via Bluetooth or a 3.5 mm chord. It has built-in speakers and you can record your vinyl to digital if you like.

Probably the best thing about this turntable is its retro design and it comes in 4 colors. Its dimensions are 15″ x 13″ x 7″.

This is a good turntable for those new to vinyl but does have the drawback of the built-in speakers not being very loud. If you do need more volume you can connect external speakers to the headphone jack.

Like the Navigator above, this is a well-built machine with great looks and actually costs even less making this a great deal as well.

Shop the retro collection at Victrola! 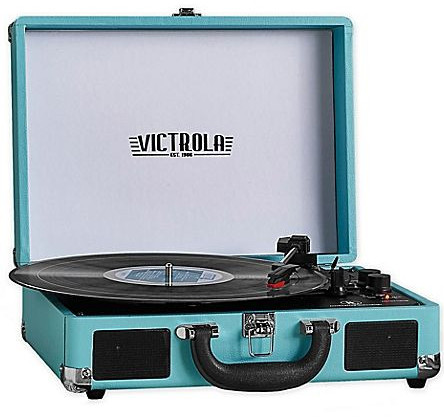 Now this is a fun little Victrola that is good for the price conscious. Suitcase record players have become popular again. They were popular back in the 1950s and 60s and this one is a reproduction of those same record players.

This is a very portable record player as the entire turntable fits inside of a durable suitcase. The turntable will play 3 speeds for vinyl records and is also equipped with Bluetooth connectivity so you can stream music from your phone.

This is an entry level turntable and so it does not have the build quality of the turntables shown above. The platter is made of a thin plastic and doesn’t have any soft material that is usually on a platter to reduce vibrations and protect the vinyl. The tonearm is a little flimsy also but if you want to spend a little more money you can upgrade these items.

When it comes to the built-in speakers, suitcase record players are quiet but are good for a bedroom. If you’d like to connect to some powered external speakers you can use the RCA jacks or you could connect to wireless Bluetooth speakers as well.

Probably the best thing about the suitcase record player is that it comes in 33 different colors including some with cool designs as shown below.

We’ve taken a look at some modern day Victrolas that purposely do not look modern day. As far as the technology though, these offer eons more than what was available back when Victrola began in 1906. Not only do these play vinyl records but also CDs, cassettes, streaming with Bluetooth, and radio.

The build quality of Victrolas are really great and they are affordable as well. These won’t replace the turntable in your home stereo system but serve as a standalone system that you can show off as part of your decor. It helps that they sound good too and have a lot of capabilities in addition to playing vinyl.

If you’ve been thinking of getting a retro looking record player definitely look into Victrola, they are the original after all. Let me known what you think in the comments below. Would you consider buying one of these? Thanks!