It just so happens as I write this article, I happen to be in the market for a new AV receiver. I want one that will be great for listening to music and also for my home theater. After doing some research online, I’ve found the one I want.

But first let’s back up a little. I have to admit I’ve gone a little crazy with home entertainment purchases lately and have pretty much bought all new gear for music listening and TV viewing, and have set it up in my basement which has become my listening room/home theater.

I’ve recently purchased two SVS Prime tower speakers, an SVS Prime center speaker, and an SVS SB-2000 Pro sub woofer. These items I got during their Labor Day outlet sale. I’ve also purchased a GooDee YG620 1080p LED projector. This leads me to wanting/needing a new AV receiver for all my new equipment.

Wouldn’t you know, Yamaha is introducing two new AV receivers this year, the RX-V6A and the RX-V4A. Both are expected to be released in September and as I write this it’s the 22nd of September so I should be able to order one.

My current choice is the 7.2 channel RX-V6A. It has more channels than I currently need but as long as I can afford it, I like that I can expand my system in the future. The RX-V4A is a 5.1 channel system which is still more channels than I currently have and is cheaper but will limit my future expansions as it will meet my initial expansion plan and no more. I could go the RX-V4A route and save money but I really don’t want to get into a situation where I want to add more but can’t without having to buy another receiver.

Let’s check out these two new receivers. The first thing to mention is the RX-V lineup has a new look with a simplified modern design that includes a new high-resolution LCD display. Also new, is the jog dial with touch-sensitive buttons. This new look is matched by the receivers capabilities to support an outstanding audio and visual experience. 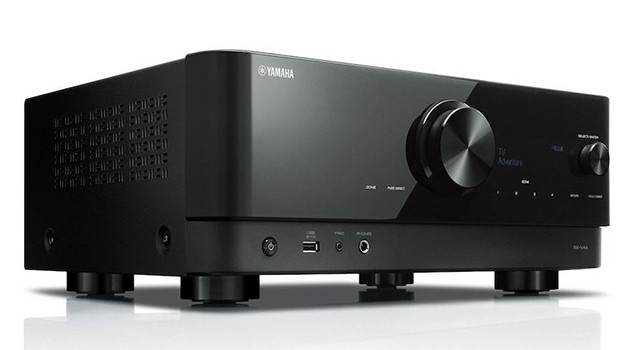 What’s great about Yamaha’s two new receivers is that both come with future-proofing support that includes 8K, HDMI 2.1, and HDR+10. The RX-V6A is the more powerful of the two new receivers with its 7.2 channels and 100 watts of power per channel. It also has a Zone 2 option that allows for the connection of speakers in different parts of your home.

When it comes to connections, the RX-V6A has HDMI 2.1 with HDCP 2.3 and eARC for its seven HDMI inputs and one HDMI output. It doesn’t appear that I’ll have to worry about having enough HDMI inputs as this one has the most on the market. The refresh rate supported is 8K/60Hz.

The RX-V4A is a 5.1 channel receiver with 80 watts of power per channel which is less powerful than the RX-V6A but it is also about $150 cheaper. Also missing in this receiver, is the support for Dolby Atmos but there is 8K/60Hz support. You’ll also find four HDMI inputs and one output that features HDMI 2.1 with HDCP 2.3 and eARC. YPAO automatic room calibration is supported which helps optimize the sound of your home theater based on its environment.

Both receivers will be able to support the 4K/120Hz refresh rate after a firmware update.

My plan is to go with the RX-V6A but I think both receivers will do well for Yamaha. The RX-V6A should meet all of my needs so I’ll be ordering the receiver soon. Be sure to check back and see how it all worked out. As I pointed out in the introduction, I have all the components I need for my listening room/home theater except a new receiver. I would also like a new turntable but I’ll save that for another blog entry. Also, you can check out my unboxing videos for the equipment I’ve already purchased on my YouTube channel here https://bit.ly/2RS9UF. If you have any questions, please leave them below in the comment section. I’ll see you soon.